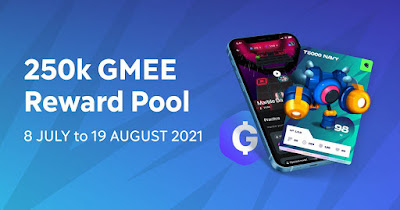 GAMEE is a high-engagement gaming platform, where users complete game missions, compete in tournaments and earn prizes for their activity. After the success of the six-week-long GMEE Liquidity Mining Event held last month, GAMEE is now launching their second 6-week staking event. This time it will be even bigger with a pool of 250.000 GMEE up for grabs!

Users with the GMEE/ETH Liquidity Providers staked in staking.gamee.com will be earning GMEE tokens. If already staked in the previous event, no need to worry, as you will earn rewards automatically without needing to unstake.

Is the event worth participating in?

With a pool of 250k GMEE Tokens, GMEE/ETH LP token holders have the privilege to earn their share of the pool every second. The longer the LP Tokens are staked, the more rewards will be earned. So if someone has missed out on the first event, here is a chance to redeem your fortune!

What more does the platform offer?

Suppose you just logged in and did not participate in the GMEE Liquidity Mining Event. In that case, the GAMEE Prizes platform offers an enthralling gaming platform with more than 80+ proprietary hyper-casual HTML5 games in their inventory. Players can play at gamee.com or download the app on both Apple and Android platforms.

These are games to suit every genre, be it the greenhorn newbies or the hard-nosed competition-loving players. For the latter, the team behind the gaming platform hosts highly competitive tournaments that offer prizes. And that is not all. GAMEE has developed games with many well-known brands such as NASA, Guinness World Records or ATARI.

GAMEE is also currently working on developing Arc8, a highly competitive gaming platform where GMEE owners will be able to compete in skill games and earn GMEE tokens. Stay tuned since this summer they will launch their first beta access!

GAMEE ARC 8 IS OUT ALREADY CLICK HERE TO START EARNING THE ARC 8 TOKING.

The GAMEE Token (GMEE) is an ERC-20 utility token. The token is created as a currency of purchase, utility, reward, and action in supported play-to-earn games provided on the GAMEE casual gaming platform.

Regardless of the native stored value, it may hold, GMEE will serve as a platform for action, reward, and incentive that connects multiple game titles on the GAMEE platform.

GAMEE offers a modest introduction to the world of Games. The team behind the gaming application is also proud to reveal that GAMEE has over 25 million registered users, 50 million monthly gameplays, and more than 4 billion gameplay sessions to date. On average, each user plays GAMEE’s games for 25 minutes a day. Notably, the application was able to achieve all with the help of its motto to make the gaming audience aware of the benefits of blockchain technology.

You can learn more about GAMEE at https://www.gamee.com/

How I Have Been Earning Bitcoin on Timebucks Doing Simple Tasks

CRYPTO BUSINESS: 9 Promising Cryptocurrencies To Watch Out For In 2021

Few Reasons Why You Should Start Mining Pi Cryptocurrency Now

This site uses Akismet to reduce spam. Learn how your comment data is processed.